November 04, 2019
Life is what happens when you're busy planning your next homebrew.

To say it has been a while is an understatement. But, it hasn't been long enough for me to give up on it. Yes, we're still talking about homebrew...though it could easily describe my efforts at finding my next place of employment after 16 years of dedication to one company.  Thankfully(?), I decided to finally take some time and get in a batch. And, since it was fall and most retail outlets don't bother stocking much in the way of porters outside of Deschutte's Black Butte Porter, it was time for me to revive the yeast in the fridge and put it to work. 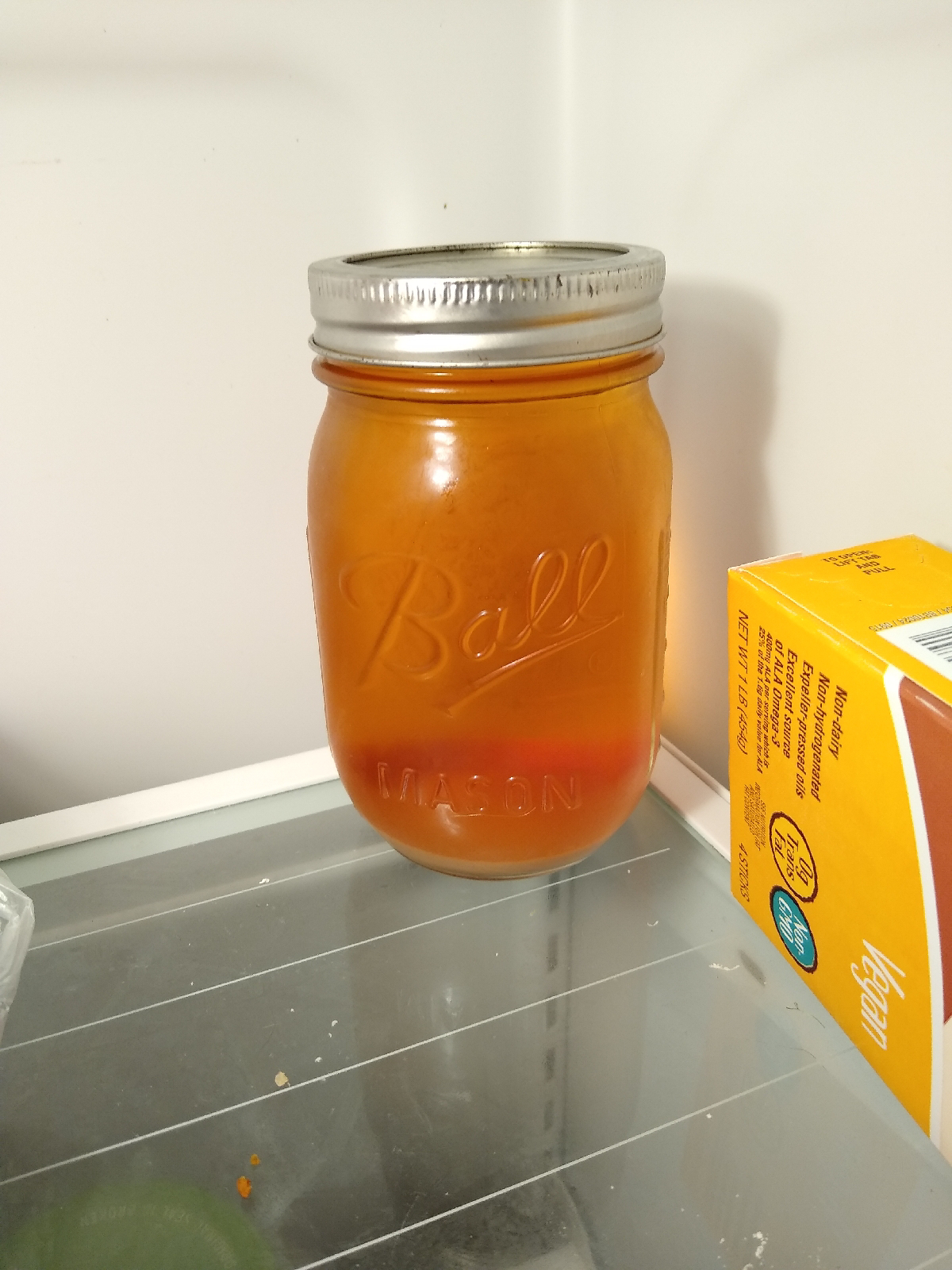 If you follow me on Twitter though (@brokenhelmetdan), you'd know that didn't quite go as it should. But, it did revive! The Imperial Darkness yeast is definitely a hearty yeast as well as vigorous, as we'll see later.  But before that, we have to brew!

Ok, we have to mash first!  ...but it's all part of the process. So into cooler mash tun the grains went. Target temp nailed....though the mash was a bit thinner than hoped for. 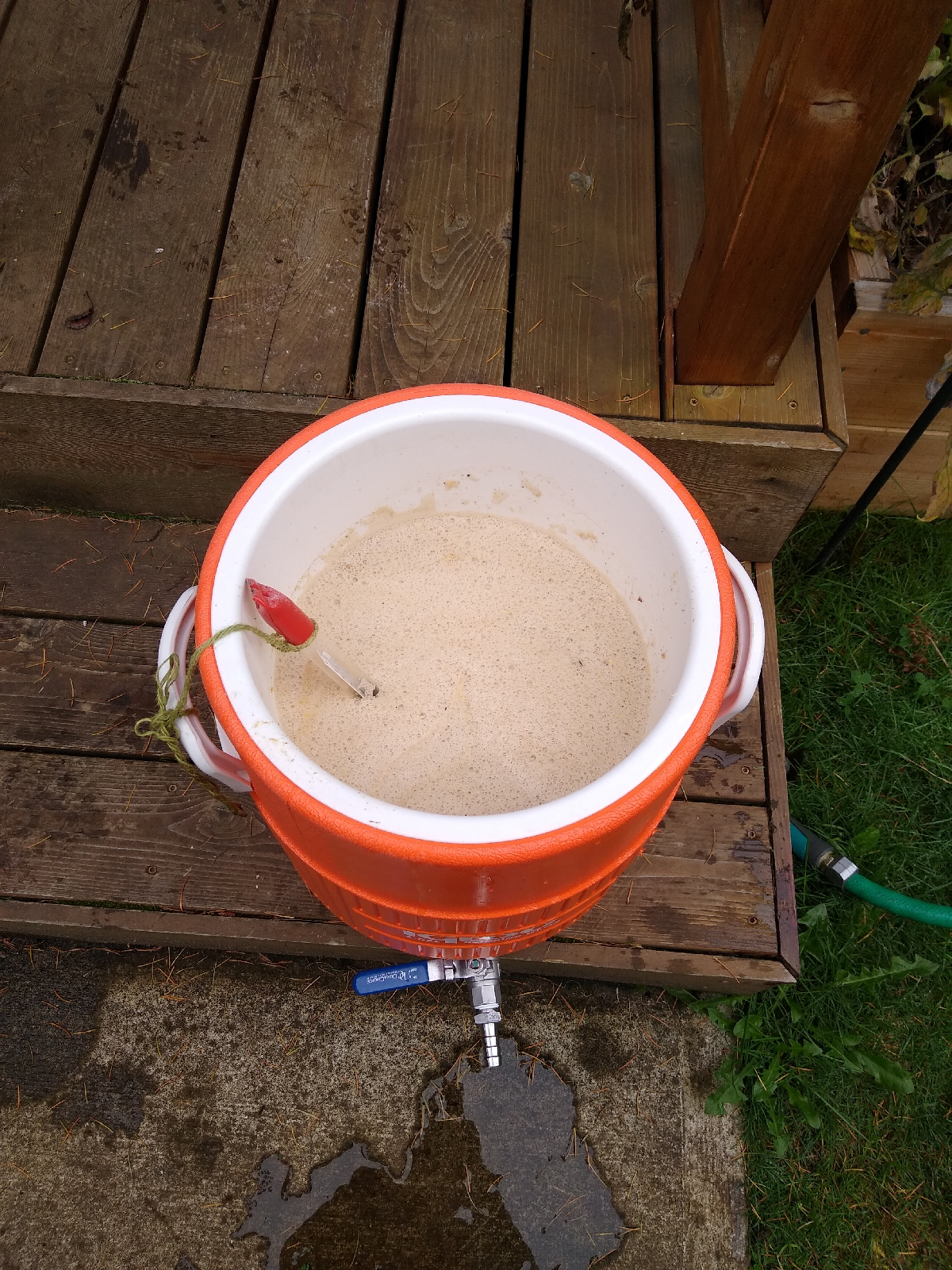 I'm pretty sure I thought the flaked barley would help to make up for some of the initial thin consistency, but I would end up being incorrect.  And do we all know what happens with a thin mash?  Low efficiency!  ...but more on that later. 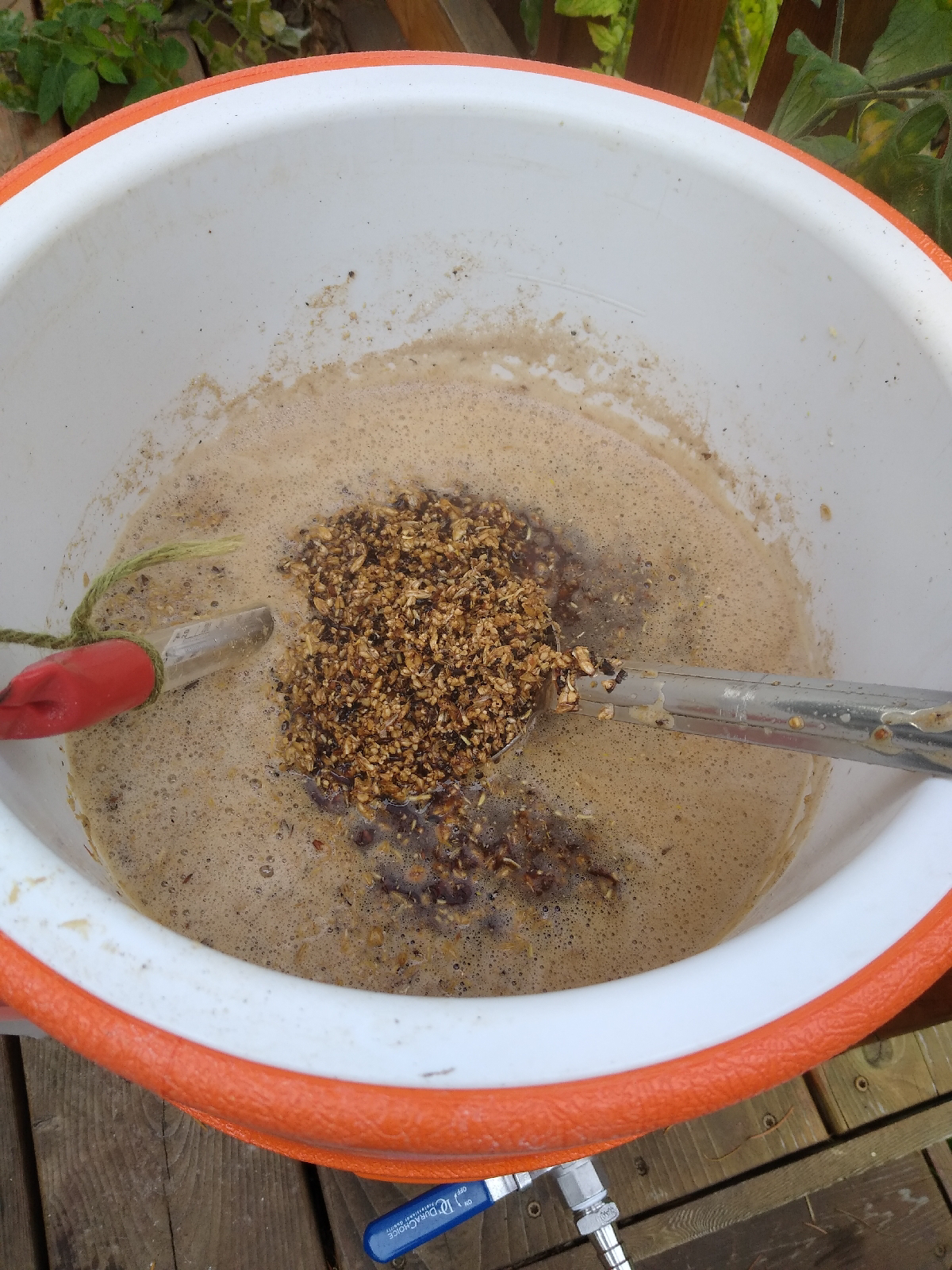 The first runnings were a fantastic flow of coffee aroma and roasted grains. The aromatic experience continued through the entire sparge process. 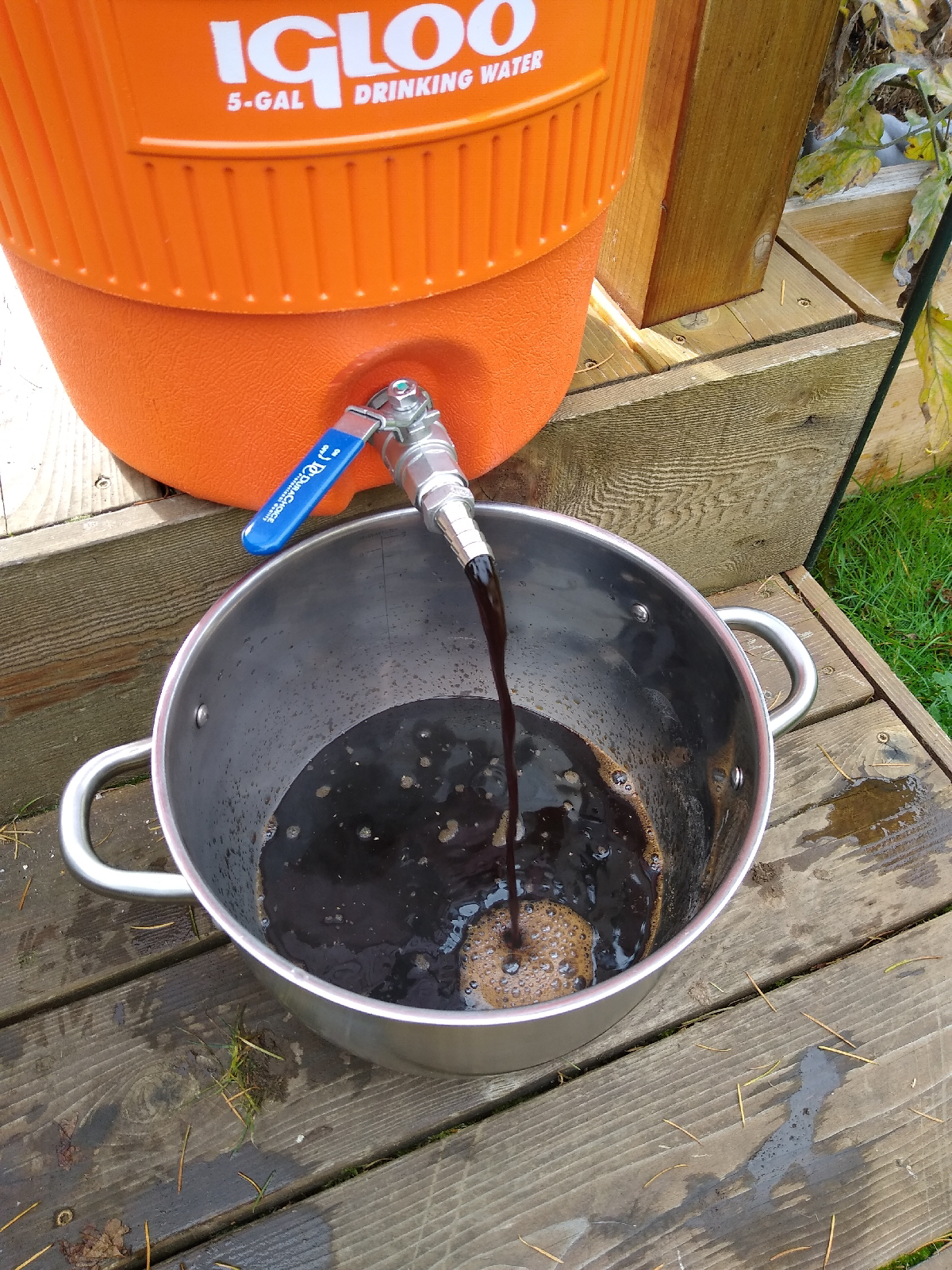 Kicking the wort up to boiling didn't take long, especially since drawing out the remaining wort took quite a while. 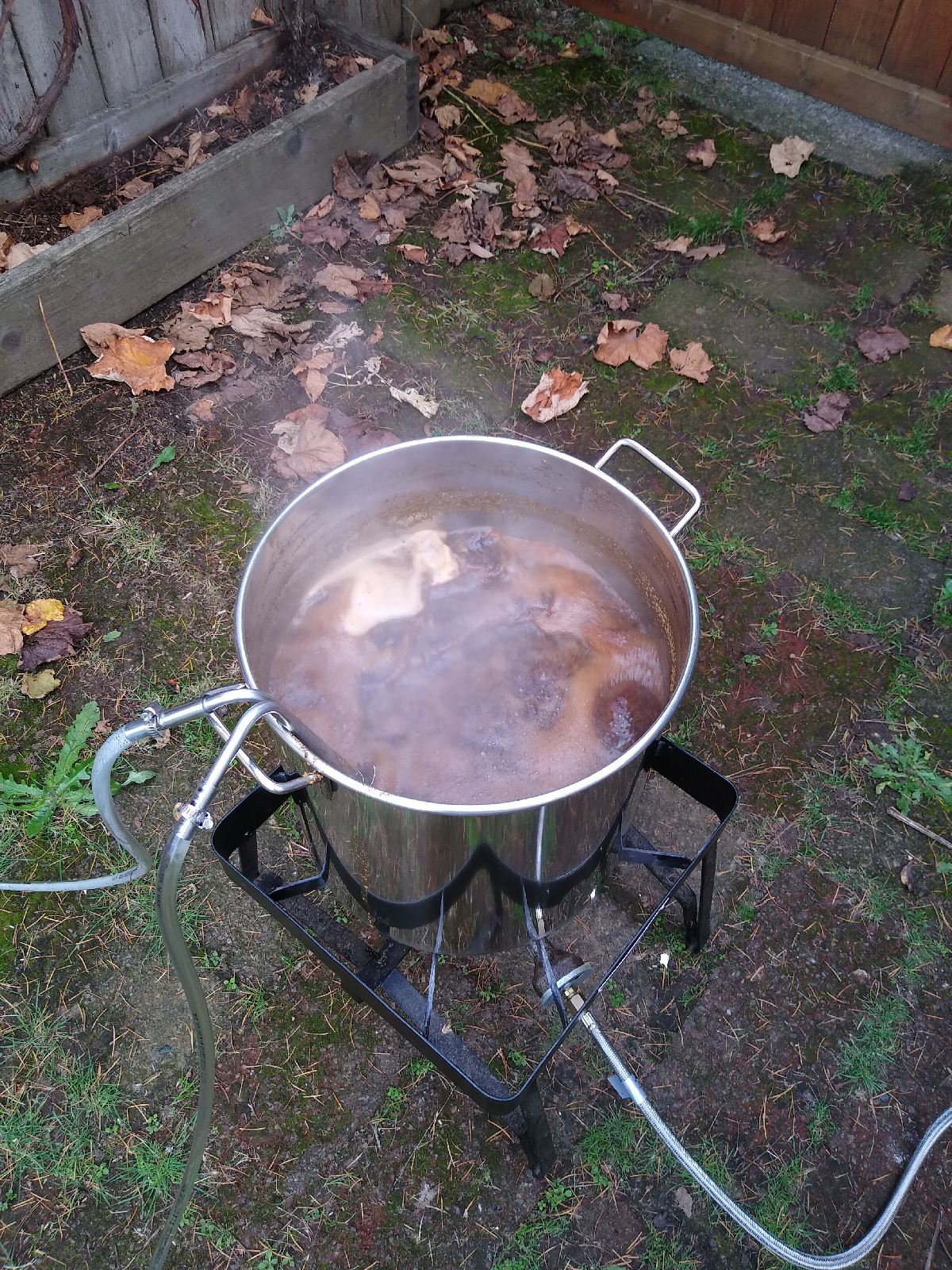 Since the first running seemed sufficiently thick and there appeared to be a good amount of liquid left in the grains, I decided to do a second runnings beer.  It's a great way to complicate your brew day and can even add to your daily exercise if you decide to do it on the OTHER side of the deck on the BBQ burner. Go ahead - ask me how I know.  ;-) 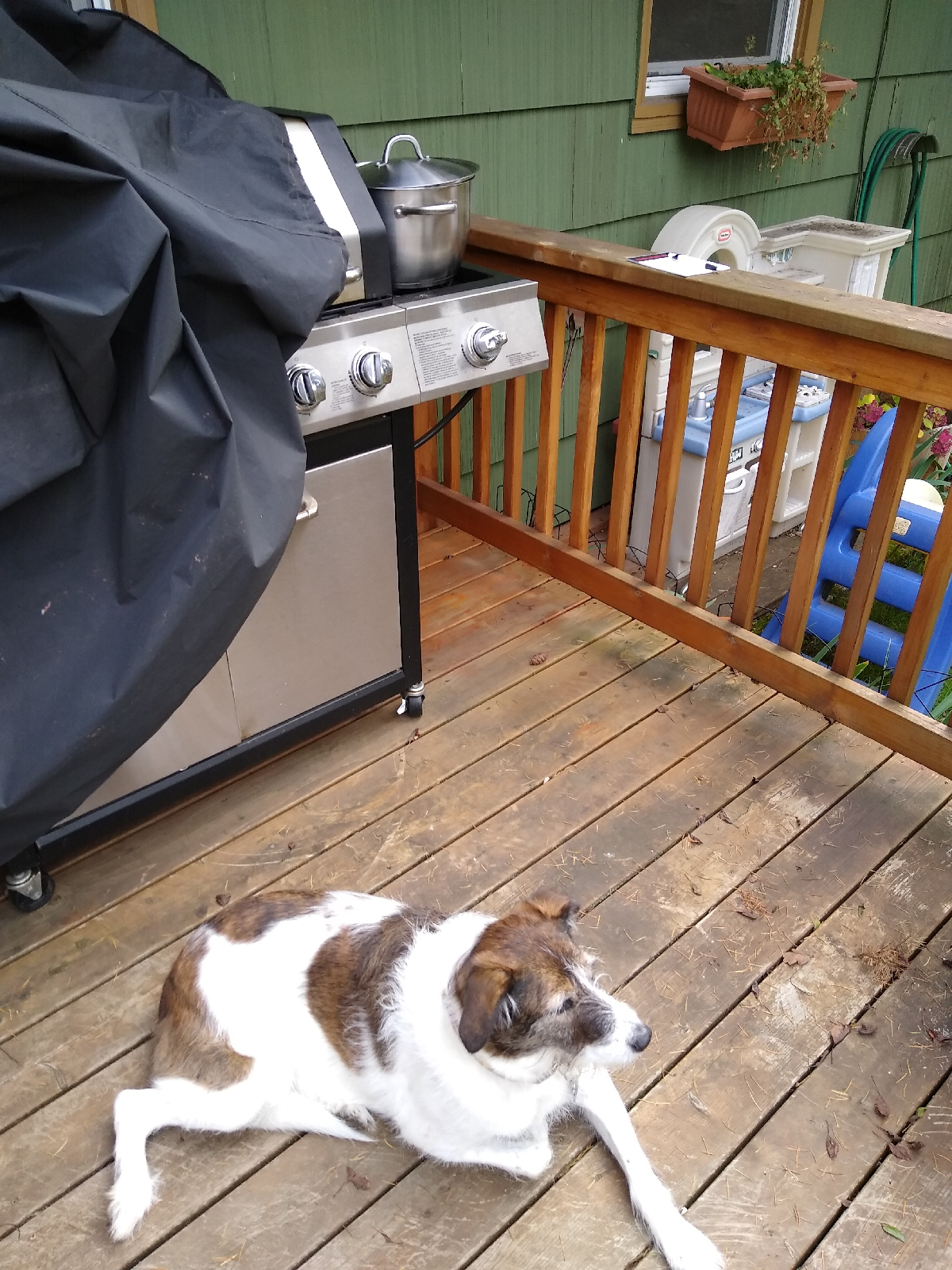 Thankfully, I had my other brewer's assistant on hand to keep an eye on things.  When she wasn't off chasing the squirrels, she made sure the beers didn't go anywhere...or the deck. She's good like that. 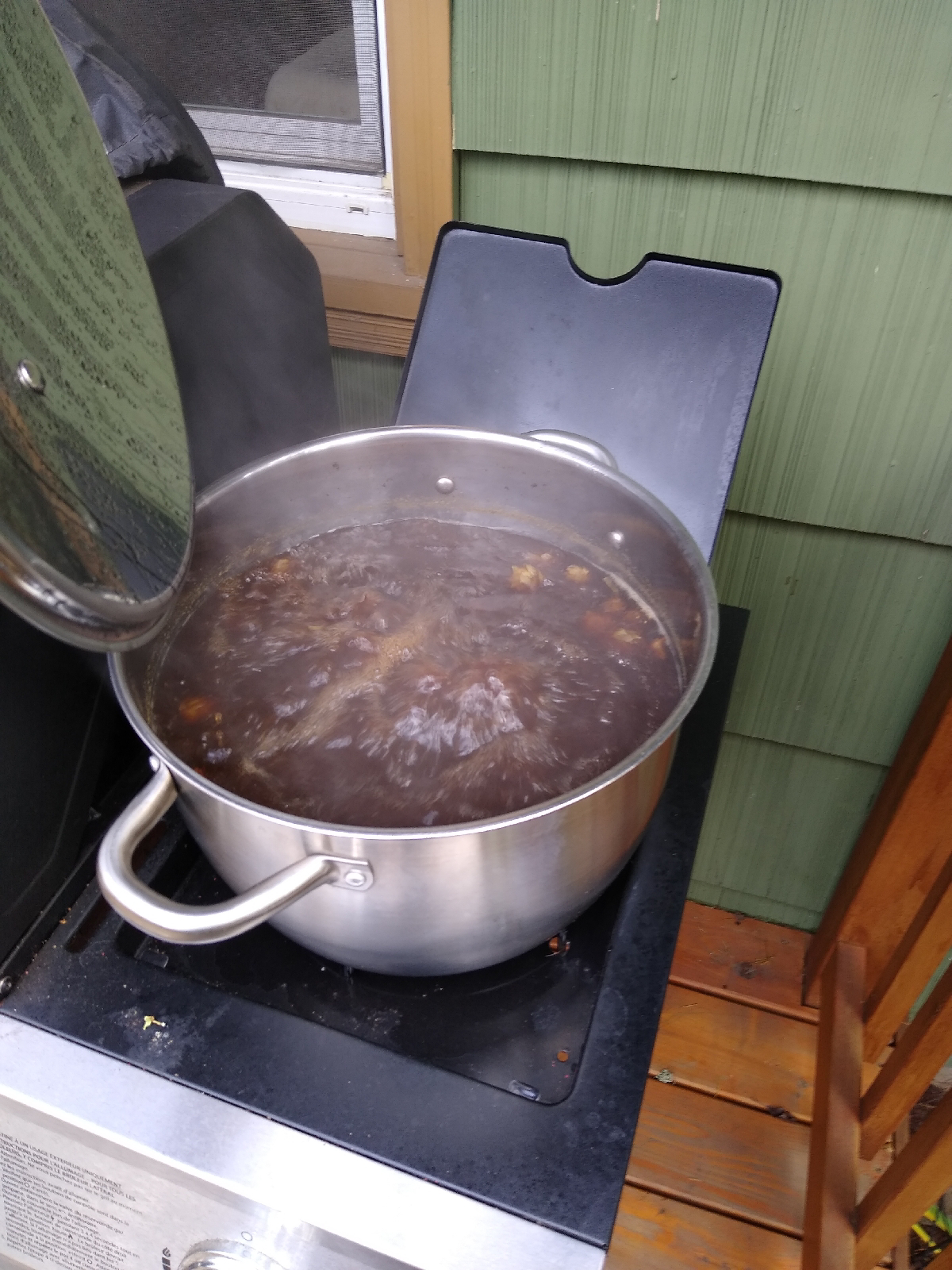 Once both batches were boiling, it was time to take care of the mash supplies, which also includes laying out some grains for the neighbor's chickens. 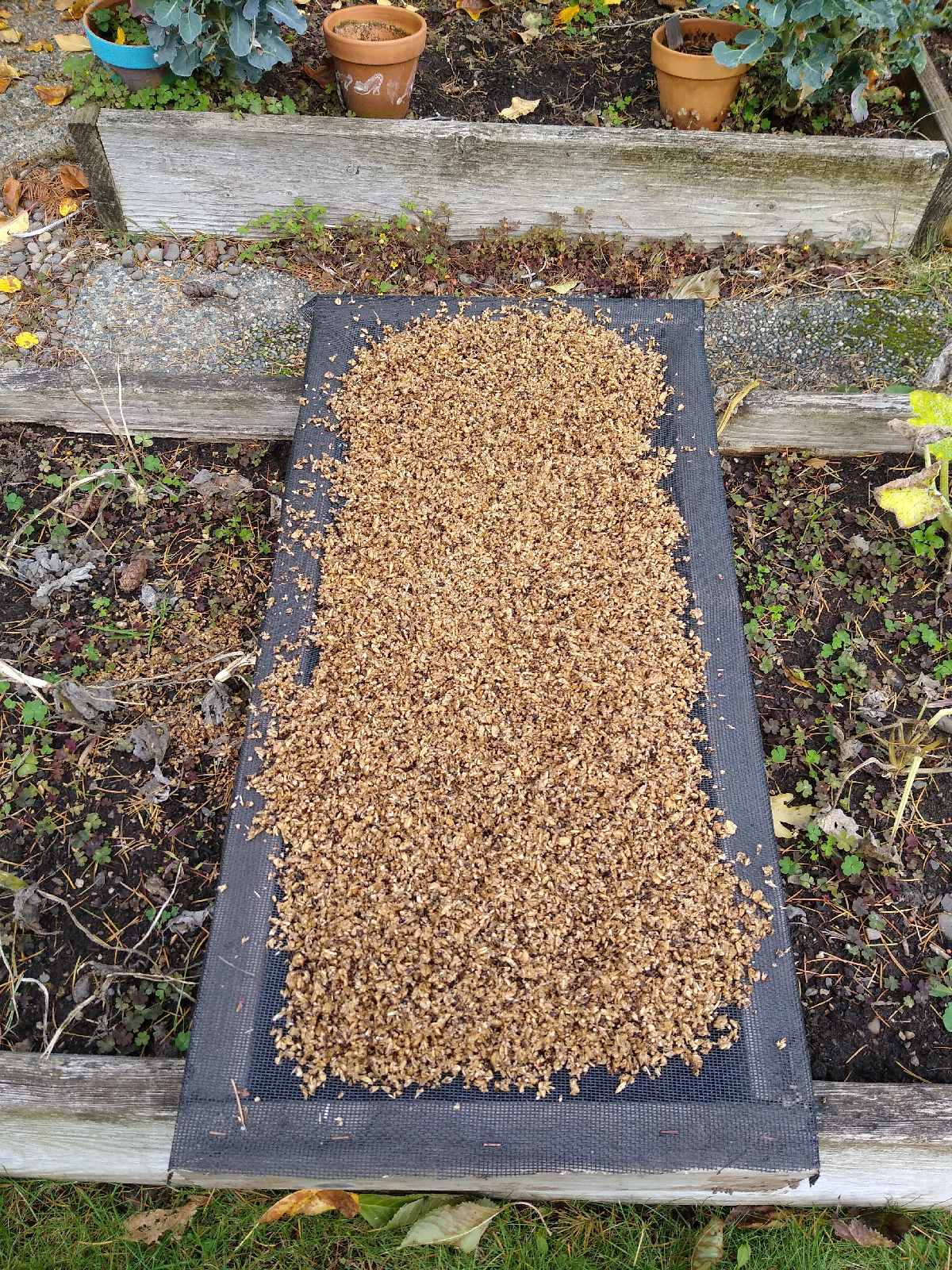 A couple of hours later, it was time to put the beers up for a bit.  ...but, this time around, I was going to go BIG in the blow-off container department. 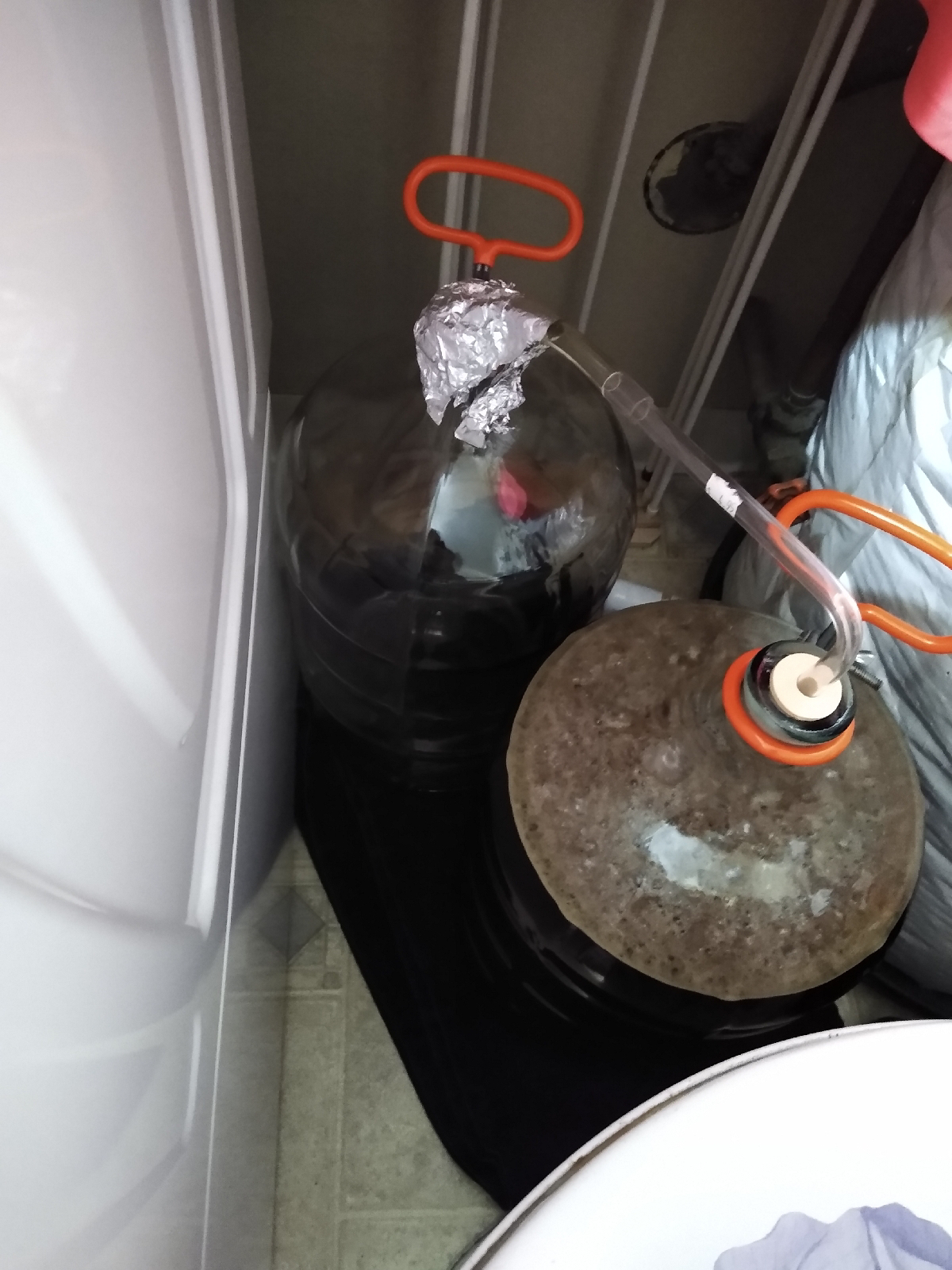 ...though the second runnings batch was a small one (1 gallon) I made sure to use a bucket with plenty of headspace. 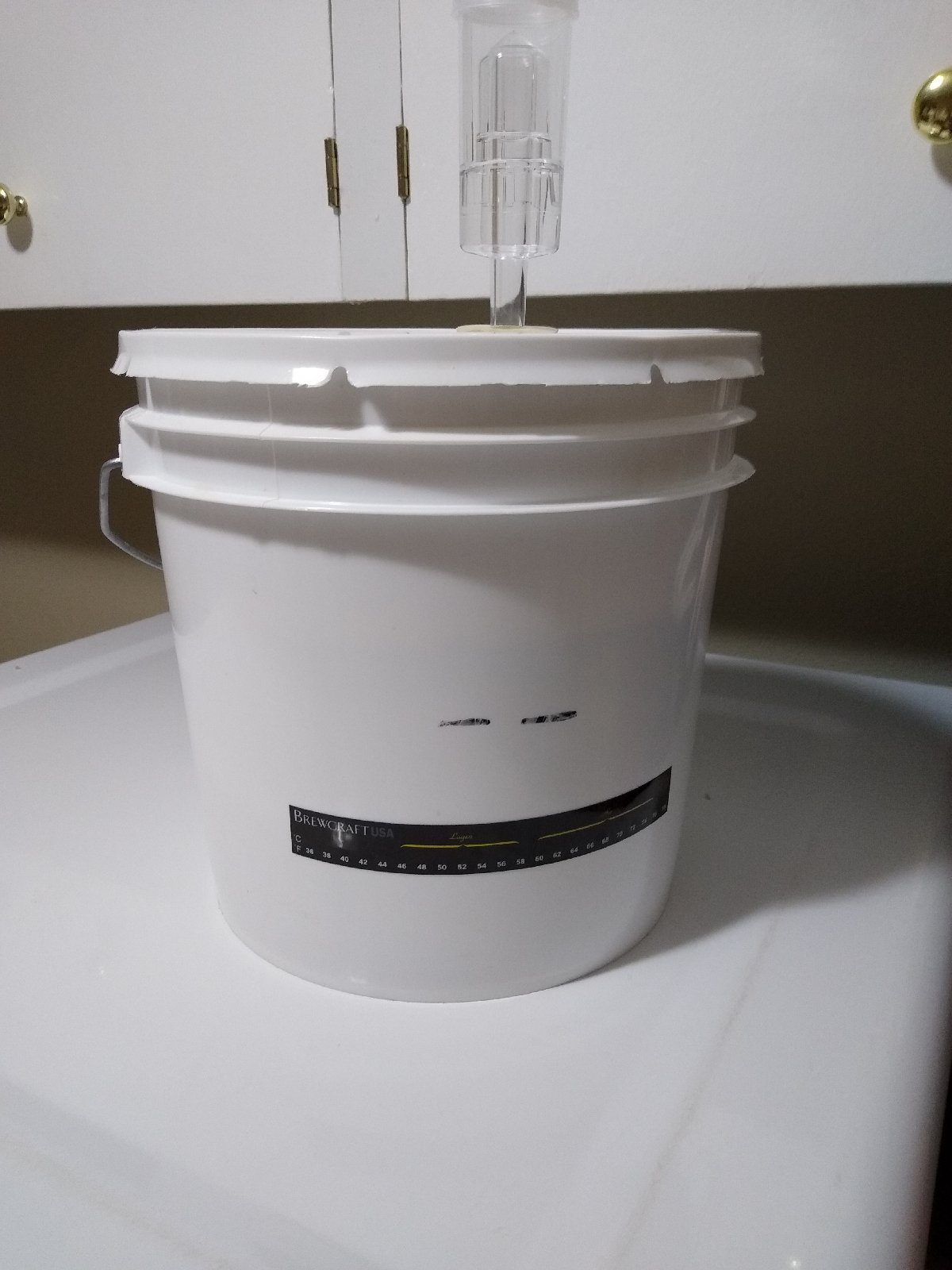 While the results of the blow-off were not nearly as messy as last time, the blow-off tube was still clearly needed. It took about 3 days before I felt like I could go back to the standard airlock. 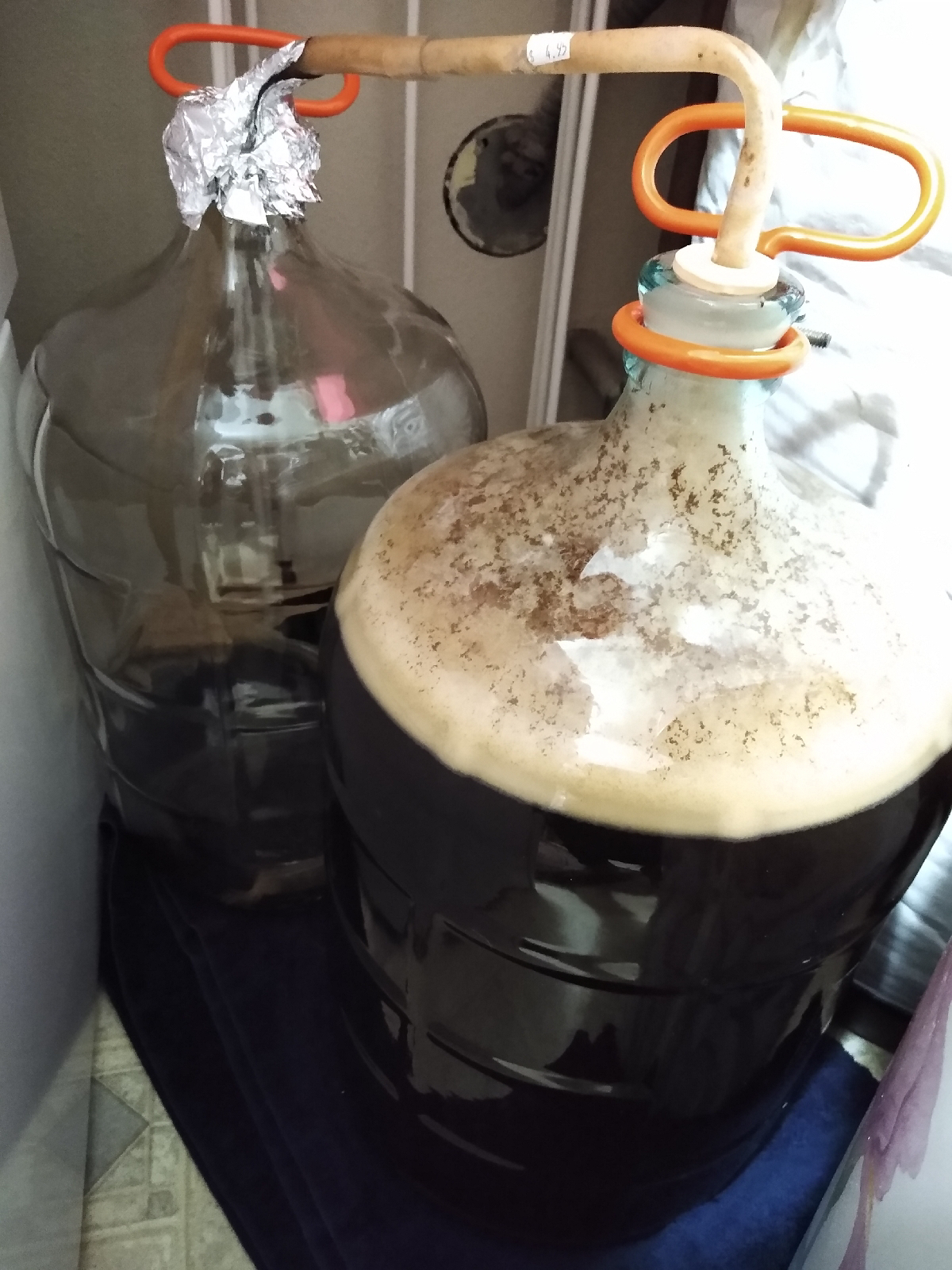 And so things started fermenting away. The primary batch ended up with a disappointing OG of only 1.044 on a target of 1.055. That whole thing about efficiency that I mentioned earlier? Yeah, this is where it showed itself.  I can only attribute the results to that slightly watery mash at this point.

But, it could still be good. A 5% porter would hurt my feelings.

The second beer came in with an OG of 1.030. Since I'm writing this over a week after brew day, i can tell you it's a funky one. Probably over hopped on the late side, it is currently sitting at 1.006 thanks to some old T-58 yeast I had. This definitely contributed to the funk, but I have to wonder if the near 96 hour lag time before it really started fermenting had something to do with it. Either way, it still has a bit of coffee and roast coming through the flavor while the aroma is all Nobel type hops...mostly Willamette.  I'll likely bottle it just for the sheer sake of doing it, but my expectations are low on this one.

Hopefully all is well with porter. As of writing this, it's still stashed away, waiting to be racked....which will hopefully happen tomorrow.