...And I thought my Octoberfest was late!

February 24, 2017
It's February. I haven't brewed in months...for various reasons.  I had the ingredients to do a barleywine. It appeared I had the time. It was time. 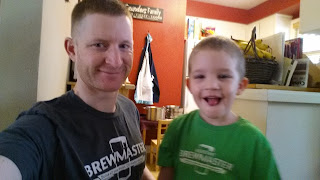 My son and I donned our Brewmaster t-shirts courtesy of my lovely wife and set to it.  The idea, since weather has been a bit of an issue lately here in the Pacific NW, was to brew inside.  So, the batch size was one gallon...ish.

The grains had been hanging out in the garage for over a month. But, sealed well and often near freezing, I had no doubt they'd still be viable for this brew.  Not only that, when I do a one gallon batch, my efficiency has been proven to be much greater than my typical larger batch technique.  Go figure!

So, heat some water, drop some grains in the water....and watch the temp stay above where I want it to. Great. So, outside the mash went. 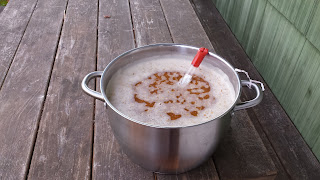 I'm still a little surprised it took as long as it did to cool down to normal mashing temps, but that's jus the way it goes sometimes. If I were working with a larger volume batch and my water cooler, I have a pretty effective way of adjusting for this. But in this situation, I don't have much other recourse than setting it in a cool area and giving it a bit extra attention when it comes to mixing. 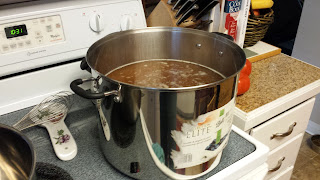 As mentioned at the beginning, the intention was to do this batch inside - the ladies of the house were away at a Girl Scout cookie booth - so it just made sense. But, between the volume and the lack of power on a glass top stove, it just wasn't happening quick enough. And, the sun came out!  So, outside we went! 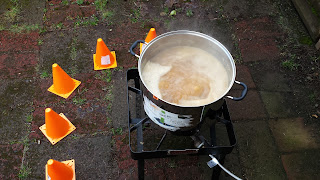 Once my son and I escaped to the backyard and hooked up the burner we were boiling in no time. 90-ish minutes and 3 big hop additions later, we were left with just over a gallon of wort that came in at 1.110.  Yes, this OG was higher than expected, but I can chalk that up to the efficiency of my 1 gallon batch technique.

If all goes well, I'll have a pretty massive barleywine on my hands. While the timing/seasonality is off, it's ABV puts it in the category of having the potential to age well...and honestly, when I make a beer this big, it seems like a few months of aging does improve it.  I may just be ahead of the curve in the end!  We shall see.

As for what's next, I've been toying around with this idea of doing a nordic brew with juniper. Just one of those things that speaks to me for whatever reason, Then again, I could also turn out an IPA (untested recipe) or an Irish Red (sucessful recipe) and have things ready for the spring. Who knows? With at least one more cookie booth weekend coming up, I should certainly have a shot at getting a batch in once I get this barleywine in the bottle.