October 24, 2016
Who in their right mind would brew an Oktoberfest/Marzen in October??  Welllllll.....

Ok, so maybe it's not that big of a deal, but part of my reasoning also has to do with weather and temperature control. I am currently at the mercy of my environment when it comes to fermentation temperatures.  So, in order to properly ferment something with a lager (or Marzen) yeast, I have to wait until things cool off a bit. I also have to manage to get weather and schedules to line up.  Those stars finally aligned this weekend, so it was time to bring back the Marzen Rover. 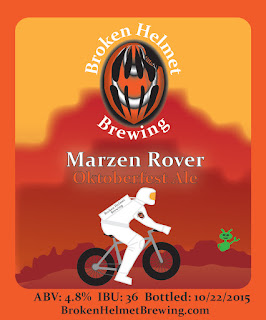 As usual, I had my helper on hand to keep things interesting.  We took a relaxed approach to brew day and played around a bit more than usual.

We also figured out that there's yet another use for the mash tun while it is sitting around.

The other thing that I found out that I would rather have not found out is that if something drops on the mash tun valve, it may cause a very slight leak that you won't notice until you go to get your first runnings.  Thankfully, I didn't lose much volume...but it did make for a quicker than usual sparge session.

Once that was out of the way and things were boiling, we fixed the mash tun back up for later use as a transfer vessel, water tested, and spent an inordinate amount of time playing with my Leatherman. Apparently that is one of the COOLEST tools that exists to a 4 year old!

As usual, my little brew helper was more than happy to help with the three hop additions and give each one a little stir to make sure they were well mixed.

Once we were through the boil, I noticed things were a little short. Once it was chilled and transferred, the gravity reading confirmed my suspicions: 1.072 on a target of 1.060. It also was about 2.5 gallons on a 3 gallon target. So, boil some more water, let it cool, add it in, and we were right back where we should be. Gotta love it when things work out like that!

Pitched the yeast and by the next morning it was cranking away. It'll probably come inside soon to come up in temp since it's more of a pseudo-lager yeast, but I wanted things to start out nice and low and that's seems to have worked out well.

While I do have the grains for this year's winter stout variants, I noticed I have a BUNCH of hops that are better suited to something in the IPA vein. So, once that's done, I think I'll do another round of the nameless massive DIPA and work through some of those hops!  ...though there are some figs in the freezer that are begging to be used in a Belgian of some sort...  Ah, the options...