The challenges of brewing semi-blind

May 26, 2016
As one continues down the path of brewing, it becomes apparent that certain tools help you hit your targets. Total volume and specific gravity are probably  the two easiest to monitor and manipulate during a brewing session. The title of this blog entry alludes to the fact that I currently don't have any volume indicators on my boiling kettle ( or a measuring stick with volume measurements) and that I also have not bothered with purchasing a refractometer, which allows for monitoring the specific gravity while brewing. The usefulness of these two things once again became very apparent during this brew session. 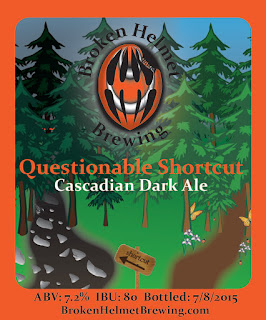 The beer to be brewed this weekend is a black IPA (or Cascadian Dark Ale, if you're from around here) also known as Questionable Shortcut... Only this time, there were no shortcuts.

I was getting a little impatient waiting on the water to reach strike temperature, so I may have mashed in a little early. As a result, I ended up doing a small decoction in order to raise the temperature to the right spot. After that it was mashing as usual and the aroma was excellent!

When it came time to sparge, the size of the batch made it clear that this had to be done in two stages. Not a big deal of course, but it does require a little bit of acrobatics with the setup that I use... Although that could have been solved by grabbing an additional pot from the house. But that would have been too easy.

Once everything was in the kettle, it was off to the races... or so I thought. After the 90-minute boil and all of the hop additions, I thought I was at the appropriate volume. Turns out I was about half to 3/4 of a gallon heavy on volume...but I didn't figure this out until I had the wort in the carboy. Note to self - a refractometer is your next equipment purchase.

Luckily for me, the specific gravity came in at 1.053, which should still ferment down to a decent enough number to make this slightly stronger than a session beer. 1.060 would have been nice to have achieved, but I can certainly live with this.  And who knows, this may turn out to be even better than the original brew with a slightly lighter body, making it good for the summer. I guess we'll find out in a few weeks. 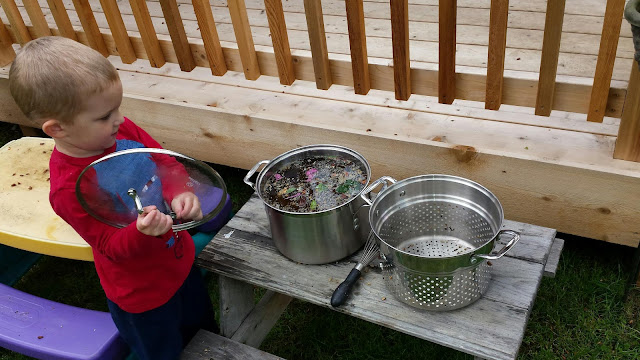 As usual, I had my helpers at hand. Also as usual, they worked on their own "brew" when they weren't helping me out with the hop additions...although only my boy wanted to stick around for the picture.

In other news, I now have a wort chiller! No more need to buy bags of ice, steal the ice from the freezer, or using the garden hose in a very big bucket to cool things down.  This makes me WAY to happy and feels a bit more like I'm completing the gear I need to do somewhat larger batches and not wait around as much for things to get down to pitching temperatures.  Yeah - beer geekery at it's finest.

So what brew is next for Broken Helmet (besides getting a refractometer and/or a measuring stick so I'm not brewing quite so blind) ?  Well, there's a can if Imperial belgian yeast waiting for me, so I'm leaning towards either a belgian blonde or possibly a dubbel since there are plums coming on in some of the nearby trees.  But then again, I can also save the yeast from this beer for use in something more west-coast-ish....maybe do another round of the massive IIPA that I made a while back that came in at 10.1% abv, or go the other direction and do a stout...or porter.  ...or, all of the above.  Decisions decisions...