At last! A brew day!

Up for this brew day was round 2 of the Fireline rauchbier (a smoked ale). 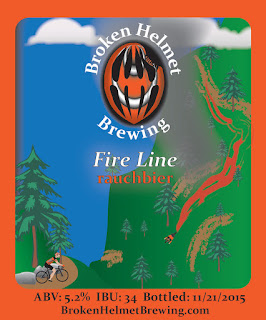 Round 2 implies more of a repeat than what was actually brewed.  I decided to adjust the grain ratios a bit to bring out a bit more of the smokiness and seriously tweaked the hops based on what I had available to me at the time.  The IBUs should be about the same, but this time, I had the opportunity to use hops that my Dad grew down in Eugene - Thanks, Dad! So, half the hops were from a commercial supplier in Corvallis and half the hops were from my Dad (a pretty cool thing in my mind).  Wonder how many people can say that!

The beginning was as spot on as it could be. I hit the target temp, held it pretty much the entire time, had a good volume in the kettle. Since it was nice out, we decided to take it outside onto the propane burner. That meant I would be using the 5 gallon pot since boiling 2 gallons in a 21 quart pot on a strong burner means lots of boil-over.  Since I was able to effectively just let it rip, I ended up cooking off a bit more water than I should have.

As interesting as an imperial rauchbier may have been, it wasn't what I was shooting for.  And, there was less than 3 quarts of wort.  Since the target gravity was 1.050, I went ahead and watered down to that level and lo and behold, it was right on target for the volume I would have shot for.  It's kind of nice that this happened because it meant that I was hitting my marks and, aside from the recipe changes, my techniques were repeatable.  Consistency is key and all that...

As with the first run at this recipe, the yeast was slow to get going. Even now that it is going, it's not exactly blazing away in the bubbler. Time will tell in the end, but I'm confident that this should turn out a nice smoky ale.  Up next?  I've been enjoying the occasional Imperial IPA, so it's time to take a swing at one. Grains, yeast, and hops area already on hand. Now I just need to find the time again...

In other news, the slightly warm winter has woken up the hops early!  The Crystal hops are taking off like there's no tomorrow.  The others in the pots seem to be waking up as well, but not to the extent of the Crystal. The hops in the ground, and in an area with more shade, are a little slower to get going, but there are sprouts on all the plants, which is great to see.