How to complicate your brew day in 37easy steps. Number 35 will shock you! ...because it's the same as the preceding 33, and the remaining 2.

To say click-bait has been a point of conversation lately might be a bit obvious.  But let's not talk about that!  Let's talk about BEER!

This marks the first time that I've gone beyond beer in this blog.  Sure, I started with ciders before the blog, but that was then. I wasn't writing then. So as far as the internet is concerned, it didn't happen, right?  ...except for the labels that I posted about...

My wonderful Mother-in-law recently offered up her home grown grapes as she was heading our way.  Who am I to say no to free fermentables!? 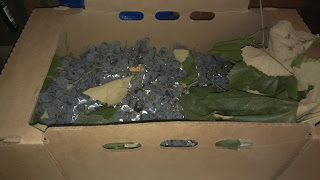 No one knows exactly what kind of grape they are, but that's not the point!  It's not as if I'm setting out to start out Broken Helmet Winery.  The end goal is to use the crushed and fermented grape skins in a beer, most likely another batch of my belgian dubbel.  So, I crushed, juiced/strained, dumped it all back in the bucket and threw some wine yeast in that is supposed to create a "bold, full bodied" wine. 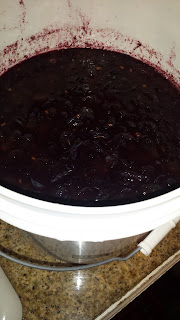 The wine has been bubbling away for about 5 days pretty consistently.  1.070 was the starting gravity, which seems a little low given what I know wine ABV's to be, but that'll still make for a strong drink in the end, I think.  Skins will be retrieved this weekend with a brew to follow...hopefully.

Speaking of brewing, this weekend brought about an unexpected brew session! As the post title says though, complications happened.  Just how did I complicate what should have been an easy oatmeal stout session?  Here we go:
#1 - Grab grains, start weighing and realize you're 50% short on base grain
#2 - Find out the nearest brew shop is closed which turns a 10 minute trip a 45 minute trip
#3 - Fire up the burner after mashing, notice an odd smell, and realize that you don't have enough in tank and watch the flame fade out after about 10 minutes of boiling.

Ok - so maybe not quite as many steps as advertised, but hey, when you have a couple of cute kids hanging out with you while you brew away, everything is all smiles in the end.  See!

While I was working away, the kids put together a green tomato salsa beer with remnants from this year's garden. Samples were taken, but it was deemed not quite ready for consumption.

In the end, I ended up with 2+ gallons of 1.065 OG (I think) oatmeal stout wort that's fermenting away with the last of the S-04 yeast that I had on-hand.  Any subsequent batches will most likely be done with a liquid equivalent, but as this was supposed to a 'use what you have on-hand' batch, so it'll be fine.  ...and honestly, my previous batches using S-04 have been really good.

In other news of the beer, the Marzen Rover should get bottled tonight. It ended up finishing at just over 5% and all my little test tube tastes have made it seem like this recipe should be a success.  The yeast even transferred well and should make a good base for a rausch beer in a couple of weeks.  Now to get that label done... 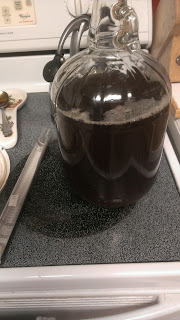