September 28, 2015
WOOHHOO!  All it took was a super blood moon eclipse celestial even thing, and I was able to get a beer brewed!!

...ok, that's a little bit of an exaggeration.  But, given 2 kids with full schedules and lots of stuff to do around the house, something has to give!

This weekend's brew session was definitely a family affair, as you will see.  It was ultimately a fun day, and hopefully there will be a really yummy beer in about a month or so.  What was brewed?  Why, nothing other than an Imperial Pumpkin-ish Ale.  It initially started out as going to be an Old(e) Ale, but hey, it's pumpkin season, right??

So here's the scene in the backyard.  My set up to the left. The kid's set up to the right.  Well, my son's set up...though his sister did help a little from time to time.

You get a bit of a better idea as to the kid's set up below.  Tanner has his own pot to work in, and believe me - if you try to brew without him having his own gear set up, you won't hear the end of it.  Thankfully, he has fun with it, and he'll even be sure to warn you when his pot(s) are "hot."

Lest ye think the kids just pretend to brew...
Behold the kid's fall mystery brew in all its glory!  Contents: pumpkin/squash guts and rind, zucchini (because why not when you have a plant that won't stop producing), fir cones, sunflower seeds, sugar, a little bit of excess wort from Dad.  The results...


Big zucchini nose, definitely sweet and bit plucky, but probably needed a little more time to age.  But I wasn't the only one to sample it...

Best of all, in true Portlandian fashion, a truck was loaded up to haul the spent grains/detritus to a composter.


At some point, I managed to work on my beer as well.

From the initial look of things, I was thinking this may be one of the UGLIEST beers I had ever made.  The color was a strange brown shade. 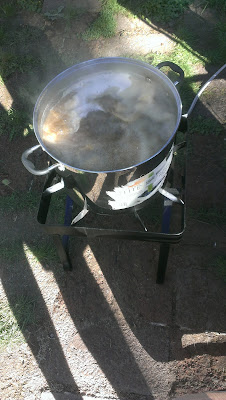 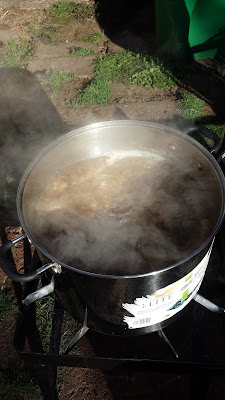 Thankfully, as things boiled down and the addition of the squash kicked in, the color shifted to a bit more appetizing orange brown shade.

In the end, I have around 2 gallons of wart at the MASSIVE gravity of 1.094.  Yes, really. The potential for this beer is pretty wicked and the wort was, as expected, crazy sweet.  It was a bit of a monster to drain into the fermenter from the combination of loose hops and boiled squash.  It's a nasty comparison, but, as I was straining it, it seriously reminded me of some pretty nasty diapers!  While I'm sure I'll do some variation of this again, one thing probably won't be repeatable - sitting under the blood moon/lunar eclipse/super moon, draining things off.  While I managed to finish the brewing side of things up before dinner time, it took until 9:30 or so to get it chilled down properly.  I really need to do better job on that part and hopefully santa will bring me a wort chiller for Christmas.

It'll be interesting to see how this turns out though. I pitched an old yeast cake from a batch with American II yeast, but I didn't have any action as of this morning, which makes me wonder if it was too old.  So, I'm currently toying around in my head with either getting another smack pack of Amercian II or possibly taking it a different direction and pitching my last pack of S-04 (english) yeast.  Either could produce a good beer, but I was initially going for a cleaner ale, so that may be what keeps me with Amercian II .

Oh, and I picked the last of my hops with the help of my daughter.  It wasn't much, but these Crystal hops had a very dank aroma to them, so figuring out where to use them might be a challenge.  It's always nice to have a little help with such a tedious task though. 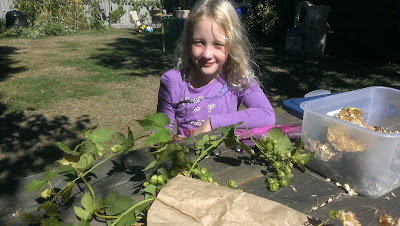 So there it is! Blood moon brew day with a big ol' pumpkin beer that might be ready by Halloween. Definitely one for the record books.