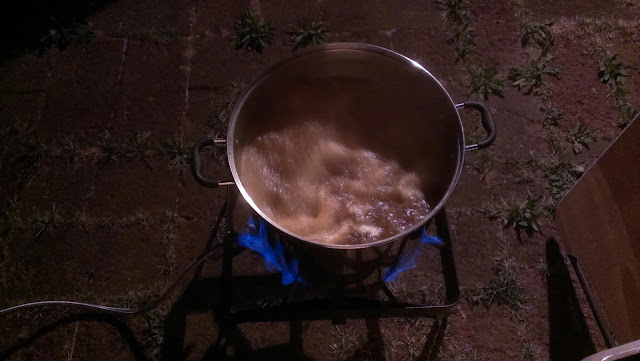 Another brew session has come and gone, and yet again, not much in the way of pictures.  It's a bit tricky when you're wrangling 2 young kids that are both tired of being outside in the heat...even if they were in the shade...with popsicles.

This weekend was the weekend to knock out round two of the Cruisin's Cleric (Belgian Dubbel).  I dubbled (sorry, couldn't help it) up the volume, took MASSIVE license with the grain bill, and have plans to add a little something to secondary on half of it...maybe.  Perhaps with all those tweaks, it'll get a name of it's own...especially if it tastes nothing like the original.

The brewing itself was a bit off the normal path.  I set up the mash, let it soak while I played with the kids (that part's pretty normal), but once I sparged all the wort out, I hit the pause button. 4+ gallons of sweet wort sat for about 4 hours while I took care of family stuff, dinner time, kids to bed, that sort of thing.  I came out to about 130F wort, so it's kind of amazing to me how well that temp held and with it that hot, I really don't foresee any contamination issues...especially since it was boiled for 90 minutes after that!

One tweak that I'll be really curious to see how it plays out is the use of coconut sugar.  I was going to make a syrup for the addition, but ran out of time and really just felt like experimenting a bit since the grain bill also has a few changes.

After finally chilling down to around 85F, I took a gravity reading of 1.068 (adjusted for temp). It's a bit shy of where it was supposed to be, but I'm not surprised given the lack of conversion that I'm seeing from the pre-milled grains. I'll be glad when I have worked through them!  Thankfully though, 1.068 should still work down well enough to provide a proper dubbel strength abv...assuming my yeast does its thing.  I'll admit to being slightly nervous about this because it's the first time I've taken a small amount of yeast and built it up in a starter.  Hopefully, by the time I get home tonight, I'll be able to look into my little fermentation area and see that bubbler working away.

Up next?  Bottle up that CDA from a couple of weeks ago and then most likely brew that big stout I was thinking about a little while back followed by something along the pale lines again.