July 20, 2015
Another hot weekend in Portland meant that the urge to brew was minimal...despite penning a porter recipe from the leftovers that I have on hand that actually looks REALLY good.  Perhaps a night brew session is in order sometime soon.  I did manage to get half of my Belgian Dubbel into bottles.  The plain version came in at 8.5% and is probably a bit rich for a true Dubbel  In the meantime, I thought I'd check in with the hops.

Below is the hot zone. South side of the house on hot year such as this might be a bit much for them to take.  Then again, they are all also first years, so that might be just as much of what can be seen as well.  The 5 bines are: Newport, Northern Brewer, Crystal, Sterling, and Chinook.  If I'm lucky, that's the L-R order, but I can only guarantee the Chinook which is easy to remember because it took off like a cat with its tail on fire. I'm sure Comcast appreciates me making their line look a bit prettier. 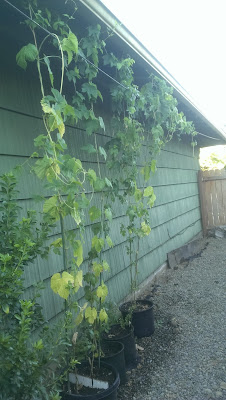 The hops in the part of the yard shown below seem a bit happier, especially the Cascade, which is on its second year.  The Cascade is the prolific looking one to the back. The string in the foreground has a Willamette on it.  Both have started flowering.  I'm going to have to relocate most of these in some manner though for next year - there's just not enough room here if they all grow like the Cascade (the top tier box) did. 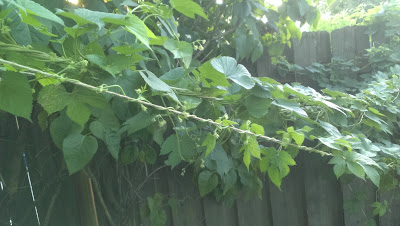 Surrounding the Cascade (L to R) are a Newport, Willamette, and Mt. Hood.  I'm a bit bummed about the Mt. Hood - something nibbled on the bine just as it seemed to really get going. Hopefully something will come from the laterals.  I had also just about given up on the newport in this one for the year, but it's starting to really grow...and that Willamette! It's practically acting like a second year!  We'll see what comes of it all eventually. 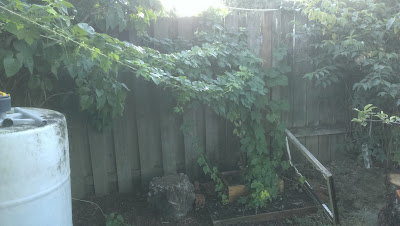 Next year should see some better planned grows, now that I have a better idea of what I'm working with and now it wants to spread. Good times though - I definitely like being able to provide some of what is going to go into my beers.