Something Pale This Way Comes...

June 02, 2015
The weekends have been pretty busy here at Broken Helmet Brewing - even without trying to brew!  But, this was a weekend where beer needed to be brewed!  On the list?  My first swing at a pale ale.  I'm shooting for more of an English variety, using the english yeast from the recent batch of scottish ale that has been rinsed a bit.  IBUs should be in the 50-60 range and ABV target was 6.5% with target OG of 1.06.  Batch size?  2.5 gallons...all grain, of course, with my new igloo mashtun.  Sounds easy enough, right?  How does it go? The best laid plans of mice and brewers...

Things started out pretty normal. Heated the water to what I was the right temp, dumped it in my mashtun, added the grains, but the temp didn't drop.  Held way to close to the strike temp of 165F. Ended up dropping almost half a gallon of cold water in to get it to settle down to around 155F...which was still a little above where I wanted to be, but I wasn't sure how much heat I'd lose.

...and then I noticed the grains.  The grains were supposed to be milled. SUPPOSED to be milled.  Yeah...not so much.  Lot's of whole grains remaining from the base malt.  I don't know how I didn't see it earlier.  The two other additions were all well milled, but these....I could have done better with a hammer.  I will say at this point that I'm working off of freebie grains, so I should have done a better job of looking and will stop by a shop to re-mill next time, but still - very frustrating. 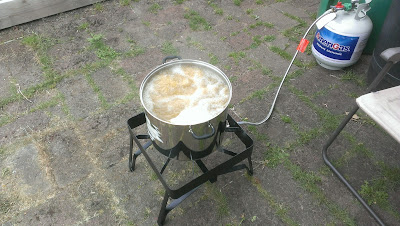 On the bright side, I'm really starting to get a feel for this burner. Lots of power and no massive boil-over this time..even with a maxed out kettle. 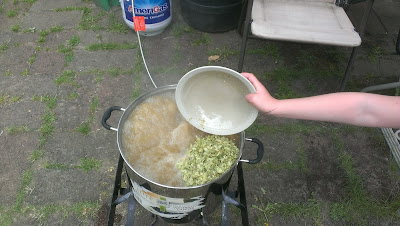 Of course, I had a helper with the hop additions.  This is a big half an ounce of whole leaf cascades going in with the help of my daughter (who actually did ALL the hop adds) at 60 minutes remaining.  What can I say?  When you work at this level, it's a bit of a family affair.

Things went pretty smoothly for the hop ads, but the reaction to the whirlfloc add was a bit unexpected.  I've generally just used irish moss (and will probably go back to that), but I had a whirfloc tablet come into my posession so I thought I'd give it a shot, broke it in half, tossed it in, and watched the batch foam up almost to the top of the kettle....and this was with 20 minutes remaining, so it was almost half empty at this point!  Like I said, will probably just stick with irish moss from here out.

Chilled, pitched later that evening, and the thing took off a couple of hours later. Pitching yeast cakes is seriously awesome as far as getting things going quickly.  The pictures below show it about 12 hours after being pitched - the wort underneath the krausen was absolutely churning!  A video probably would have been more impressive to show, but imagine those chunks (of yeast) doing loop-de-loops.  Really.  Reminded me of a school of fish! 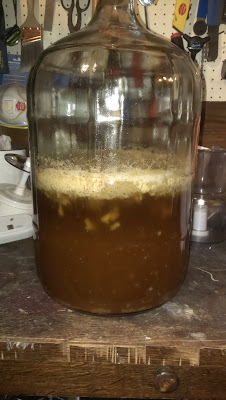 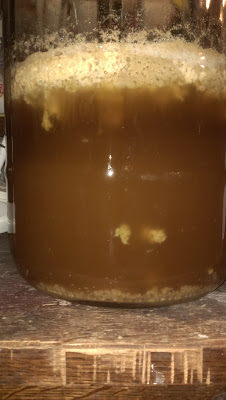 Now, a day later, it has all settled down and REALLY looks like some time in secondary will be needed to clarify it a bit.  I almost forgot to mention that, as a side effect of the not-milled-enough grains, the gravity is a bit low.  It came it at 1.040, which means that this will be a fairly low ABV in relation to what I usually brew, probably in the 4% range.  We shall see.

While I wasn't drinking while brewing (I always feel too busy to imbibe), I did get around to trying out round 2 of the Berm Run Chocolate Stout.  As you may recall from my post about it, the second round was a bit of a challenge.  I'm happy to report that the results are good.  It's a solid 8.4% imperial stout and hits many of the marks that you would expect: big roasty character in the nose and the mouth, solid bittering, and even a bit of a dry chocolate finish.  I'm going to attribute that last part to the chocolate I used.  But is it where I want it?  Almost.  I'm going to have to do a side by side of versions one and two soon to really gauge if there was an improvement.  I think there was, but one should always check these things out thoroughly!  I'll be sure to report back with my findings. 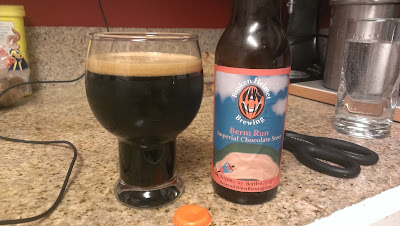 Up next?  The Rhubarb Sour should be ready soon along with the Scottish Export Ale. Definitely looking forward to both of those.  As far as brew schedule goes though, I either need to do another round of the Cruisin' Cleric belgian dubble or possibly another pale to see if I can get the new system (mashtun) to perform properly.  I'm definitely leaning towards the latter...and it's certainly that time of year.