And now for something completely different!

June 29, 2015
It was hot in Portland this weekend.  Real hot.  Well, it was supposed to be real hot, so I decided I wouldn't brew.  Instead, I thought I would try harvesting wild yeast - something I never really thought I would try but always wanted to.

While I didn't get quite as hot as it was supposed to get, the afternoons were still plenty warm and things weren't really cooling down much at night.  Sunday ended up being the last/best chance to get something accomplished this weekend, so I grabbed some fresh plums, whipped up a small starter, and am now attempting to harvest/grow the yeast that should be present on the plums.


While I was waiting for the wort to finish boiling, and then waiting for it to cool when it was done, I had a chance to poke around the yard after I finished fixing the gate (sagged over time and needed to line things up again), thinning some of the garden, and all manner of little things that come with a home with a yard.  The hops are looking good, but I'll save that for another post/update, and it looks like I'll have a little bit of wheat to play with soon.  I had 2 patches crop up from last fall's straw bales.  One is already cut and hanging until this one (shown below) catches up.

The evening also brought out some nice colors in the sky that made it really nice to sit for a minute, enjoy my beer and my surroundings and reflect on things a little....until the mosquitoes found me. 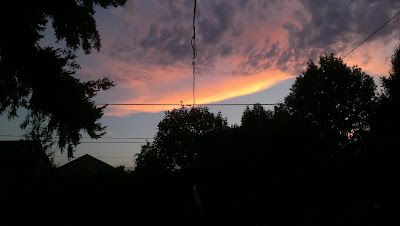