Crossing my fingers on this one...

May 04, 2015
Had a bit of a challenging brew day on Saturday.  It was time for round two of my chocolate stout and I was feeling pretty confident that things should go well with it being the second shot at it.  However, the fates had something else in mind.  First off, I hit strike temp, poured in my grains, but the temp did drop nearly as much as it should have. Great, it's hot. Too hot.  Stirred and mixed for a bit to get it down, so hopefully those 5 minutes or so won't cause any issues.  Then, when I went to sparge, I noticed that NONE of the malted oats were cracked.  NONE! Not. A. Single. One.  But, I continued on.

I also noticed that my pre-boil gravity seemed a touch low, so I used a bit more water to rinse the grains. There was still plenty of color coming off of them, so I ended up over capacity on my pot/kettle.  That led to the biggest pain in this brew day - the LONGEST BOIL EVERRRRRRR.  ...well, that, and what seemed like a burner that just didn't want to put out the power.  I probably ended up with somewhere around a 2 hour and 20 minute boil.  I don't know.  I lost track.  All I know is my bittering hops were certainly boiled long enough, and all my last addition stuff was figured out by looking at how much left I had to boil off.  It's not exactly how your're supposed to do it, but it's what had to be done for this batch.

On the slightly more entertaining side of things, I used the yeast slurry from dubbel from a couple of weeks ago.  It had sat in the refrigerator the whole time and was a nice clear tan.  The fun part came in setting it on the counter to get up to room temperature.  As the yeast warmed up can became active, there were sometimes little mini fountains of yeast from the thick stuff below.  Over time, it went from being a clear tan to what you see in  the following pictures - progressively cloudy as the yeast became active and put themselves back into suspension.

After the fun of watching the yeast come alive, I pitched the whole thing into the bucket.  The OG of 1.080 was somewhat reassuring, but having bubbler start dancing in under 2 hours was even more reassuring!  ...and wow did it ever dance!  I understand now why people like using slurries or starters!

I am defnintely looking forward to moving to a slightly larger capacity setup...and the parts below helped to finish out my cooler mash tun conversion.  Add the big burner I recently purchased and things are looking up! 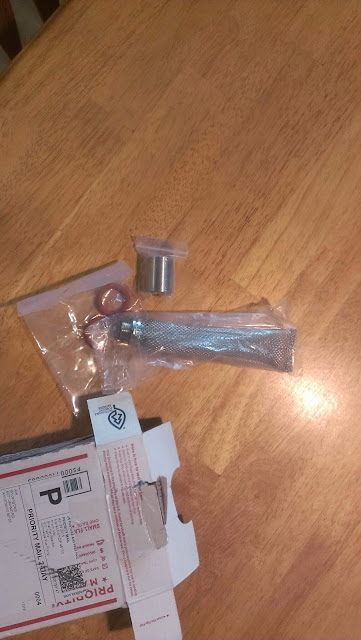 Of course, at the end of the crazy big (long) brew day, I had to have a big beer - oddly enough, it ended up being the first version of my chocolate stout.  ...and barbecue.  Things certainly ended well. 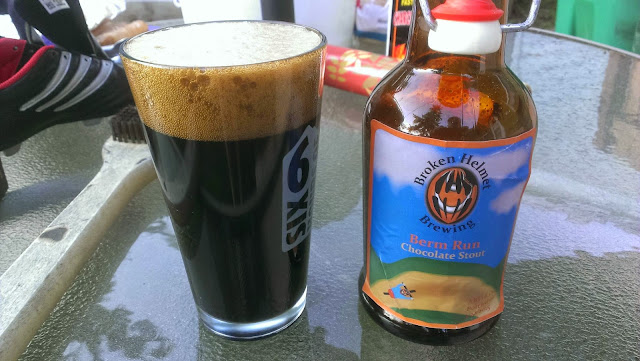